The Siculicidium monument is connected with the organization of the Szekler border guard, which was launched on July 5, 1761 by the imperial order of Maria Theresa.

At the time of the recruitment of Csík, the focus of the resistant Szeklers – “a new, special formation formed from a group of one-interest, same-purpose, similar norms of the Szekler warrior order, whose consciousness was lent by the will to fight by peaceful means” – January 1764. He gathered in Madéfalva in the days of the 19th century to jointly submit to the Border Guard Organizing Committee a memorandum proving the right of the protester. On January 6, the committee called on the armed Szeklers and gathered in Madéfalva to attend a hearing on the royal decree, before which they requested a postponement to the next day, citing the Feast of the Epiphany.

The armed Szeklers of Háromszék and Kászon attacked Madéfalva at dawn on January 7, by order of Lieutenant Colonel Carato, Baron Siskovich. The number of people who died in the massacre is still uncertain: according to Lénárd Losteiner, the number of those killed is estimated at 183, József Benkő 186, György Rettegi 600, M.C. Saxon memorial writer von Heidendorf mentions 400 people. Dr. István Balló, in his chronicle about the Massacre of Madéfalva, writes about 500 dead and 1,000 wounded.

The tragic events of the border guard organization in Csík came to history as the Madéfalva threat, its contemporaneous name was expressed by the
chronistic icon of Count János Lázár, a member of the Siskovich Committee: SICVLICIDIVM, which marks the year of the massacre: 1764. 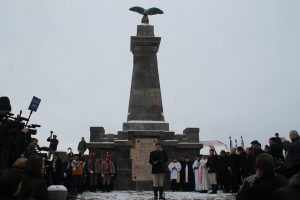 The Siculicidium monument, stays for a memento of the Szekler massacre on January 7, 1764, rises on the Vészhalom in Madéfalva. The monument was handed over to the community of Madéfalva on October 8, 1905

The area was owned by Isaac Zakaria, a landowner of Szépvíz. At the request of the Memorial Commission, the requested 400 squares were handed over by the owner in exchange for annually mass commemoration for his family.

The monument was designed by József Tamás, an architect born in Miercurea Ciuc and living in Budapest, and the construction was undertaken by István Szász, an architect from Szépvíz. The marble plaque of the monument was made by the Budapest engraver Nándor Sántha, while the figure of the turtle adorning the column was the work of the sculptor Miklós Köllő from Gyergyószentmiklós.

The intellectual author of the memorial exhibition is Gyula D. Orbán, following the writing The Massacre of  Madéfalva by Dr. István Balló. The initiating idea appeared in the of Csíki Lapok at 21st of october, 1891. In a patriotic article entitled 1764, it draws the readers’ attention to the time of the act. On November 15, 1891, a multi-member committee was formed with the task of building a monument. The initiators: Sándor Nagy, Gyula D. Orbán, Márton Györgyjakab (owner of the Csíki Newspapers), in addition to Lieutenant István Benedek, 1848, chairman of the smaller committee managing the foundation of the memorial column, loaded. Committee members: Kálmán Murányi, priest of Csíkrákos, Bazi Vazul high school teacher, Mihály Lakatos teacher as secretary, Dr. József Csíky, lawyer, director of private goods in Csíkvár County as clerk, József Gál as treasurer,

The patron of the memorial column was Bálint Mikó, the chief lord of Csíkvár County, who is no longer the county governor at the time of the unveiling of the monument. Among the participants in the inauguration ceremony was  Dr. Györgypál Domokos, chief- president of the county and vice-president Antal Becze, gave the opening speech. The monument was handed over to the community of Madéfalva for preservation.