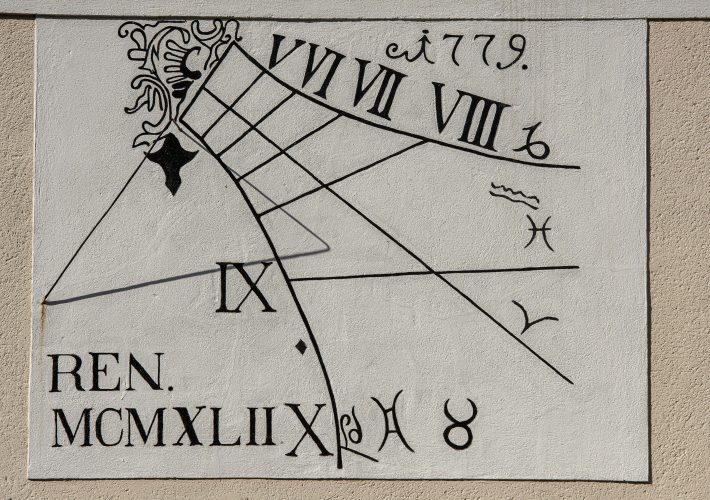 The church in Csíksomlyó (Șumuleu Ciuc)was built by the Franciscans in Gothic style between 1442-1448. Attached to this is a two floor Franciscan monastery with a rectangular inner courtyard. For centuries, a Catholic gimnasium, a library, a publishing house, a printing house operated there. There is a sundial on each three walls of the inner courtyard. The clock on the east-facing wall, which was made in 1770, shows the morning, the southern sundial, which was also made in 1770, the hours around noon, and the one on the west, which was made in 1779, show the afternoon time. All three sundials are full-hour, and roman numbers whit a  substyle. In each, a crossed line indicates the spring and autumn equinoxes. The two extreme sundials also show the daily path of the daylight hours of summer and winter solstices. The year numbers on the sundials indicate the dates of manufacture and renovation. The eastern sundial is V-VI-VII-VIII-IX-X, the southern sundial is VII-VIII-IX-X-XI-XII-I-II, and the western sundial is I-II-III-IV-V- VI position.

At the western foot of Somlyó (Șumuleu) Hill, between 1860-1862, the students of the Somlyó Catholic Gymnasium formed the Baths of the “Friends of the Franciscans”. In 2006, the joint initiative and work of a number of civic associations and foundations made it possible to supplement the mineral water source and its surroundings with artworks of various wood and stone. Thus, it also has a 1.5 meter stone sundial that stands on a smaller stone slab. The dial, which is not numbered, is a 12-angle wood-covered surface. The names of the 12 apostles are inscribed in Szekler writing. Also in this complex is the lunar clock, which symbolizes the birth of Jesus, which actually uses the light of the sun, so in practice it is also a sundial.