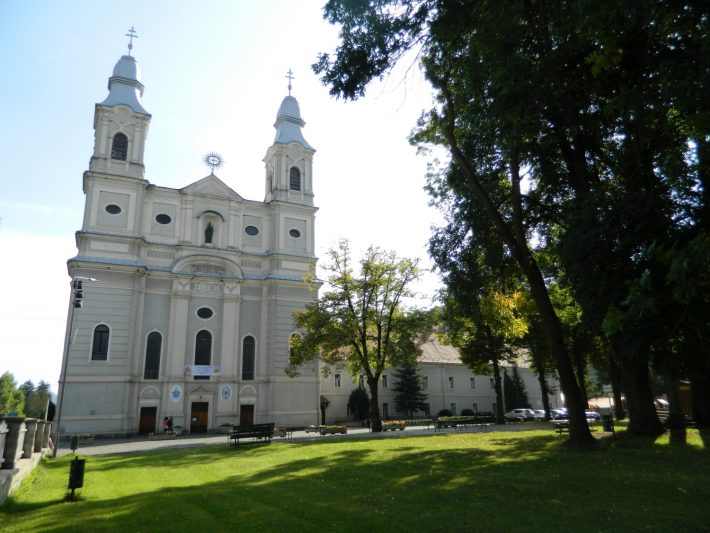 The first church was built in Gothic style in Șumuleu Ciuc  between 1442-1448. János Hunyadi Transilvanian prince also contributes to its construction. Some of the loot that defeated the Turkish troops was donated to bulid the church. It was consecrated in 1448 and offered to Visitation of Our Lady

In 1661, the Turks set it on fire and slaughtered the locals who had fled to the church. Their remains rest in a mass grave in the square in front of the church.

He also suffered significant damage in 1694 during the Tartar invasion. This attack was repulsed by the locals with the help of Ferenc P. Nizet, a Franciscan monk and teacher of Belgian descent and his students.

In the 17th – 18th centuries the church was under constant improvement, the number of believers also increased, so in 1802 the decision was made to build a new church. Construction work began in 1804 according to the plans of architect Konstantin Schmidt. This time the construction of the baroque style church was completed in 1830. Later they built the two towers. The first Mass was held on October 31, 1802. The stone material of the demolished church from the old church was also incorporated into the new building. The statue of Mary, made by goldsmith Rothenbacher from Brasov, which decorated the front, was placed on it in 1837. Bishop Fogarassy Mihály of Transylvania consecrated the church on August 20, 1876. Most of the decorations and the pulpit were made by the painter and sculptor Papp Miklós from Brasov. A door frame and a cellar window remain from the old church. The organ was bought in 1659 in Brasov from Johannes Caioni, master organ maker Eperjesi János. This was partially burned during the 1661 Turkish attack. It was repaired by Johannes Caioni in 1664. The organ used today was built in 1931 by Lipót Wegenstein and Sons Organ Factory, has 2824 whistles and is one of the most beautiful organs in Transylvania. The main arch of the church was made by master Erőss József from Târgu Mureş in 1834, on which stands a Latin chronosticon. The red letters of this can be added to read the year the arch was made. Its greatest value is the Renaissance-style statue of Virgin Mary placed behind the main altar. The statue depicting the Woman dressed in the Sun was made between 1510-1515. The statue is attributed to the work of an Transylvanian sculptor.

In addition to the main altar, there are 8 altars in the church: St. Francis, St. Anne, St. John the Baptist, St. Apollonia, St. Anthony, St. Elizabeth, St. John of Nepomuk and St. Margaret of Cortona. Next to the statue of Mary are statues of St. Stephen and St. Ladislaus. The church is also decorated with statues of St. Anthony and St. Joseph. The glass windows of the church were made in the Czech Republic in 1905. Under the choir, the Chief Captain of Mikes Kelemen is walled in the tomb .

The church also has three chapels: the Salvator Chapel, the Suffering Jesus Chapel, and St. Anthony’s Chapel. The chapels stand on the hill of Șumuleu Ciuc.

The fallback dates back to the 15th century. In 1444, during the initial period of construction of the original church, Pope Eugen encouraged the people to donate and help build the church. In return, he allowed a pilgromage in honor of the Virgin Mary. In 1567, when Unitarian Prince János Zsigmond launched a Reformation campaign in Gheorgheni, Casin and Ciuc, the locals gathered armed against the army on the Pentecostal Saturday. During the battle, women and children prayed in the temple. The prince lost the battle, the locals kept their faith. In memory of this victory and in gratitude for the help of the Virgin Mary, the faithful vowed to make a pilgrimage to the Virgin Mary in Șumuleu Ciuc  every year on Pentecost Saturday. Today, hundreds of thousands of Christians are making pilgrimages to Șumuleu Ciuc  .

In 1948, XII. Pope Pius raised the church to the rank of a basilica minor.

There are records of the existence of the Franciscan order in Șumuleu Ciuc  from 1352. In 1400 IX. Pope Boniface authorized the establishment of the Franciscan monastery. In 1442, at the same time as the church, the construction of the monastery began. They were completed in 1448 at the same time as the construction of the church was completed. It was set on fire along with the church during the Turkish attack in 1661. In 1694, during the Tartar invasion, a student of the college operating in the monastery, led by Franciscan monk teacher Ferenc P. Nizet, pretended to attack a large number of armies and caused panic among the Tartars, thus helping the locals to repel the attack. From 1630 the monastery dormitory existed. Since the16th century in monastery it was an elementary level education. Several monks taught in college. As a result of construction work between 1773 and 1779, the monastery gained its present form.

One of the prominent figures is Johannes Caioni (1629 / 30-1687), monk and polyhistor. Under his leadership, in 1675, the monks founded a printing press in the monastery. Not only church singing books, church books but also schoolbooks were printed here. Later, in addition to the printing house, they also operated a book publishing house. They printed and then supplemented twice more the collection of songs of the Cantionale Catholicum, of Johannes Caioni. Franciscan monks are considered to be chirch musical pioneers and developers of the Church of Transylvania. The monasterys library is the richest church collection in Transylvania, with many ancient prints, painted codices and book rarities. In the 16th century, there was a picture workshop in the monastery also.

The Franciscan monastery and church from Lăzarea