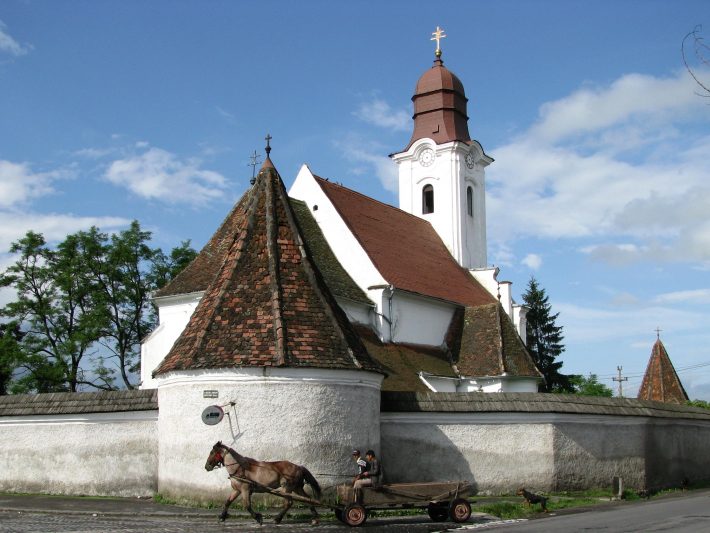 Valea Strâmbă was first mentioned in the regestrum in 1567. According to the documents kept in the State Archives of Budapest, the settlement had a Gothic church that was destroyed during the invasion of the Tatars. Between 1724 and 1734, at the expense of the Gáborffi family, a baroque church was built in honor of St. Stephen. The Baroque-style church burned in the fire from 1801. Using all the remains of the former church, the new church was built in 1838, which was consecrated in honor of St. John the Baptist. The pulpit was made in 1842, and the organ was made by István Kolonics in 1867. The church has three bells, one of it was cast in 1772. The large bell, from 1827, received the following inscription: “For the great glory of God and in honor of St. John the Baptist was cast by the priest from Strâmbă Valley in 1827.” The 10 kilogram bell was made in 1862, and rebuilt in 1913.
The tower was partially demolished and rebuilt in 1876.
The monumental church was repaired in the following years: 1838, 1876, 1924, 1966, 1968, 1976, 1992, 2011 and 2008. During the renovation works from 1992, a Gothic window was revealed in the church’s tower.
The main entrance, the southern entrance, the sacristy and the supporting walls of the doors confirm the existence of the former church. The Gothic window above the main entrance on the front of the building is also remains from the old church.
The fountain of baptism is also a Gothic origin, where the pictures of St. Joachim and St. Ana are placed. The valuable pieces of the temple are: the main altar, the secondary altars, the stone cross on the door of the sacristy, and the wall frescoes. The most valuable object is the pillow decorated with the image inserts that features a sowing sekler. On the secondary altar there are presented pictures of King St. Stephen and Virgin Mary. On the ceiling of the church can be seen the paintings of the four evangelists: Matthew, Marc, Luke and John, as well as pictures of St. Cecilia and St. David. The image of the bow represents Jesus Christ and the twelve apostles on the Mount of Olives. The statue of St. Anton from Padua, made in 1907, is a creation of a Tyrolean sculptor. In front of the main entrance is the statue of St. John the Baptist, this being the patron saint of the church and of the parish. The Gáborffi family’s bench, carved and decorated with a stem, preserves contemporary style features, is currently in the Tarisznyas Márton Museum in Gheorgheni. The monumental church is surrounded by a stone wall.