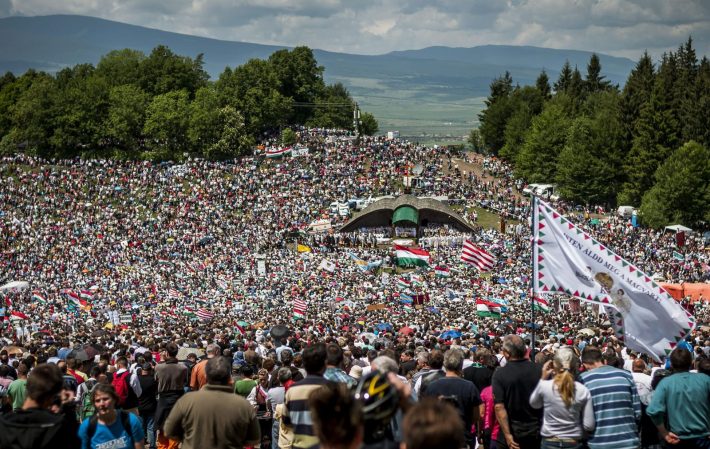 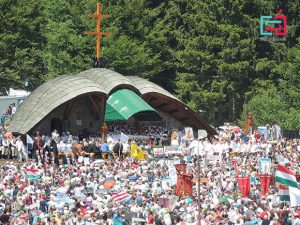 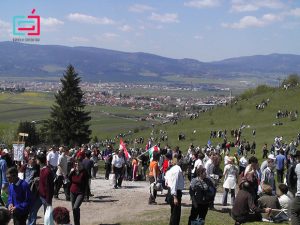 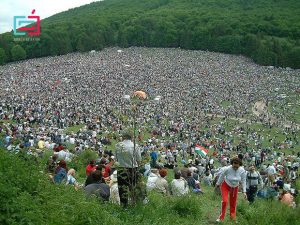 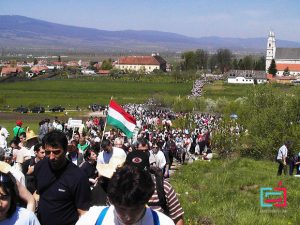 Pilgrimage from Şumuleu-Ciuc is the pilgrimage of the modern age, which at first was the most important religious event of the Szeklers, and over the centuries has become the most significant Christian movement that affects the entire Hungarian population.

The holymass is held annually at the church in Sumuleu-Ciuc and at the altar built in the saddle between the two ridges of Sumuleu-Ciuc mountain, in the presence of hundreds of thousands of Roman-Catholic Christians and other beliefs.

Pilgrim groups arrive from Transylvania, Hungary and from all over the world- Slovakia, Germany, Brazil, Australia, the Philippines, Kenya, etc. The connection between pilgrims is Christianity and the need for cultural and spiritual replenishment. Whitsun combines Roman Catholic religious features with elements of popular religion.

The history of the Sumuleu-Ciuc pilgrimage dates back to 1442, when Pope Eugene IV. granted his pilgrimage agreement to those who helped the Franciscan order in building the church. In the 17th century, the area of attraction for the pilgrimage were only the Catholic localities in the regions of Ciuc, Gheorgheni, Odorhei, three Chairs and the upper Valley of Niraj. Csángó people from Moldova attend the event only from the 18th century. The construction of the 19th century railroad and railway network has attracted even more believers to the event – the number of pilgrims has increased – and they have come from increasingly distant areas.
The first part of the 20th century and the World War period affected the pilgrimage: the number of participants decreased, and in 1916 the statue of Mary was to be escaped, first to Odorheiu-Secuiesc, then to Cluj-Napoca. From there it was returned only in 1919.
After the war the first pilgrimage took place in 1921, still without a procession. In the next year, 20-25 thousand Christians have already participated. After the Second World War the pilgrimage was forbidden by the Communist power, but it wasn’t totally interrupted – every year by Whitsun, small groups of pilgrims participated in the procession at Şumuleu-Ciuc.
After the regime change, given that the number of Christians is hundreds of thousands, event-related changes have to be made. The holymass is held in the saddle between the two ridges of Şumuleu-Ciuc mountain. Pilgrim groups arrive here, but do not participate in the procession.
The Pilgrimage from Sumuleu-Ciuc is closely related to the cult of Mary, whose main element is the statue of Mary. In 1798 the church declared the statue to be wondrous – the Szeklers believed in the power of the statue for centuries, and the bishop sanctified this religious faith. Mary, appears as a mediator and a helper, and popular faith has often attributed these miracles to the statue of Mary from Şumuleu-Ciuc. The statue could have been a lateral figure of the altar and was not initially part of the church. Based on previous research, it could be done in the first half of the 1500s, it recieved the current painting in the 19th century.