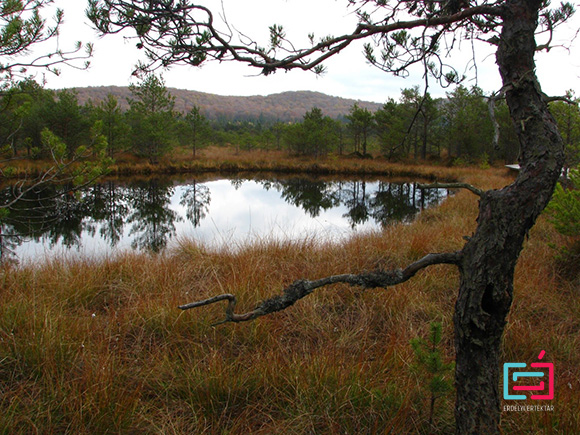 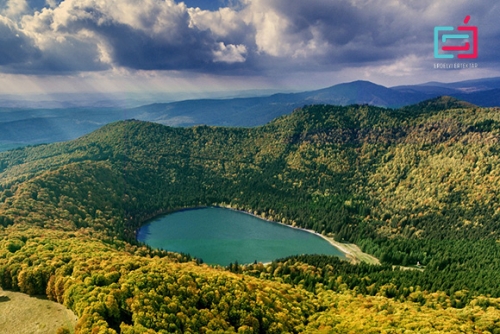 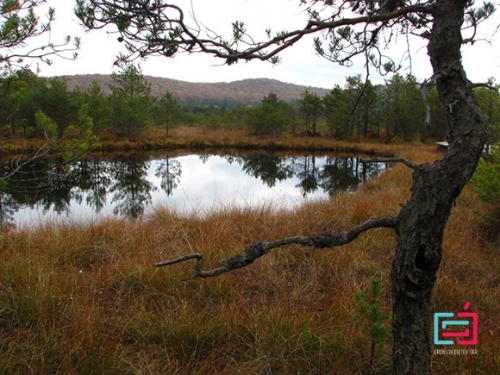 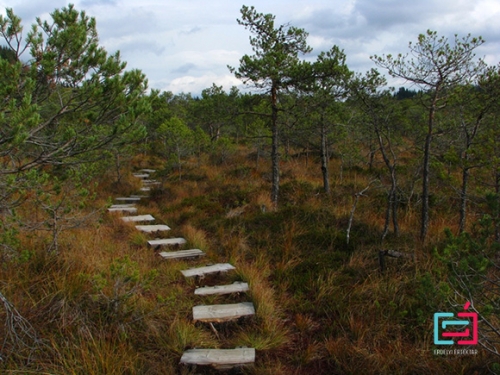 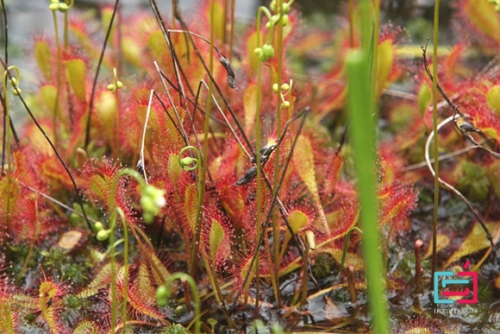 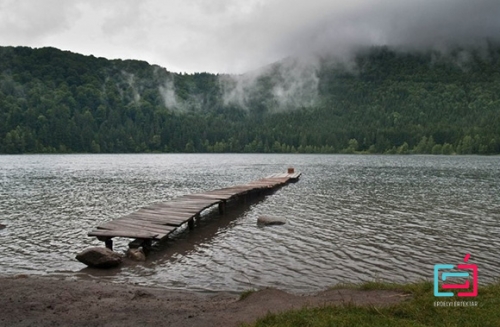 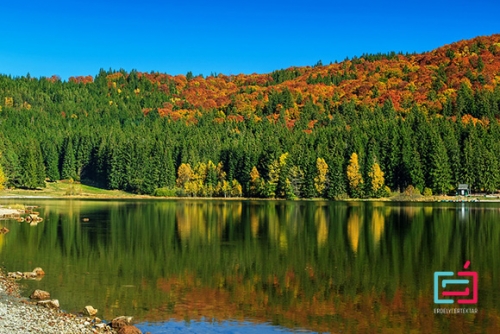 Mohoş peat-bog (known as Kukojzás or Kukujzás-post) is the last, most southern block of the Harghita volcanic line, which fills the northern crater between the two twin craters of Ciomad Mountains. (In the other crater is Lake St. Anna). At 1050 m above sea level, the peat-bog is one of the most valuable botanical protected area in Romania, part of the natural reservation, Mohoş.
According to the latest researches, the Mohoş crater was created from explosive products accumulated at the crater’s edge after a volcanic explosion. The crater’s recharge was facilitated by the faster destruction of the eastern pyroclases and the erosion activity of the Veres stream, which sprang from the crater. The former crater was gradually turned into peat-bog, which was nutrient-poor and cold, chemically acidified (pH 3.8-4.1).
The peat-bog is unique in Europe with ten meters, about 3 million cubic meters thick and its surface of 80 hectares. It is approximately pentagonal, with a maximum longitude of 1000 m and a latitude of 800 m. The water supply of the peat-bog is ensured by the rain falling on it’s surface, therefore the water and humidity supply indicators are highly dependent of season and the amount of fallen rain. Jókai Mór believed that in the middle of the nineteenth century there could be seen two or three hundred small or larger ponds in this place, but he probably overrated this number, it is also true that the number of ponds over the years was much reduced: in 1894, Istvánffy Gyula recorded twenty-nine ponds, and Emil Pop in 1960 only thirteen.
In 1908 the landowner of the composer’s estate in Lăzarea connected the peat-bog with drainage ditches, “so that the giant moor of the peat-bog can be exploited and the cattles that pass in the area not to enter in the marsh.” Subsequent drainage and deforestation resulted in a significant reduction in the content of the peat-bog. According to István Urák and his colleagues, the first official presentation proposing protection of the 240 hectare Mohoş peat-bog was dated on December 18, 1975 and declared as a protected area in December 1980.
Mohoş peat-bog became famous for it’s residual plants from the ice age, although, as recent research has shown, the peat-bog is not interesting and valuable only from the botanical point of view, but also because of the numerous rare arthropod habitat.
In the 1950s, Emil Pop, a biologist and university professor, made a list of all the species of plants and animals existing in the peat-bog and since than, thanks to many researchers, the list has been expanded.
Mohoş can be considered as a mixed forest with peat moss, largely covered by a marshy forest. “The peat – depending on it’s botanical, physical and chemical characteristics – contains peat moss, predominantly mixed moss. Preserve glacial relics, such as the species: Drosera rotundifolia, D. Obovata; Andromeda polifolia; Scheuchzeria palustris; Eriophorum vaginatum or Empetrum nigrum; Vaccinium oxycoccus.
The structure of the marsh species is characterized by a small number of species and a large number of uniqueness. The dominant vegetation is the Sphagnum carpet. It’s main plant associations are: Scheuchzerietum-semly, Andromeda-Neil, Sphagneto-Eriophoretum vaginati or Eriophoreto-Sphagnetum, Pinetum silvestris vacciiniosum, Pinetum-Betuletum caricetosum echinatae, Almatum glutinosae caricetosum elongatae or C. remotae, Piceto -Betuletum, Betuletum vaccinaosum “- we can read in the research of Mr. István Urák, Ferenc Samu, István Máthé, Adalbert Balog: Arachnida: researches in Mohoş Peat-bog.
The study group, between 2003 and 2005, identified a total of 108 species of spider in the peat-bog’s area. These represents 21 families, István Urák and his colleagues identified three new species of spiders for the fauna of Romania (Cnephalocotes obscurus, Maro minutus, Taranucnus setosus) and demonstrated the existence of two species (Zelotes clivicola, Scotina palliardi) and identified the existence of two rare species (Notioscopus sarcinatus, Gnaphosa nigerrima). They have found dominant spider species of the peat-bog is the wolf spider called Pirata hygrophilus, and in the beech forest the spider called Coelotes inermis.
Regular grazing, unregulated tourism and widespread forest harvesting have endangered the specific flora and fauna of the peat-bog.
Recognizing this, the Csíki Hiking and Nature Conservation Association (CSTTE) has taken decisive steps to save Mohoş Peta-bog, while in 2000, as a result of a successful project, with the support of the Polgár-Társ Foundation, it was built the first suspended trail of Romania in Mohoș Peat-bog.
According to researchers, the fate of the peat-bog depends today largely on stopping the erosion activity of the Veres stream. Many suggestions have been made to stop the recharge of Lake St. Anna in the hope that, it will be implemented in the near future.