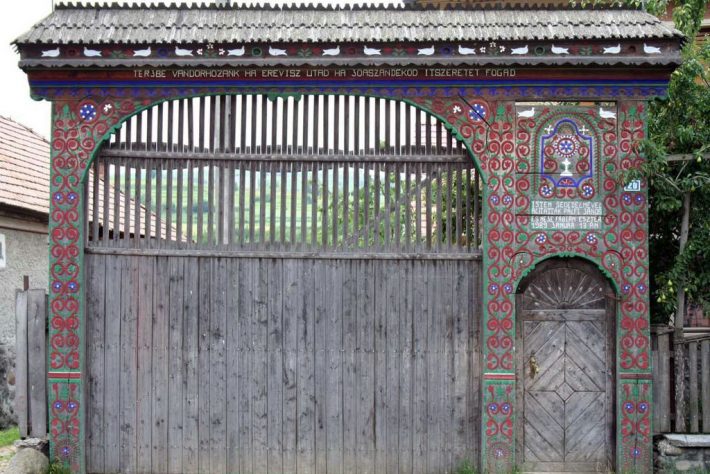 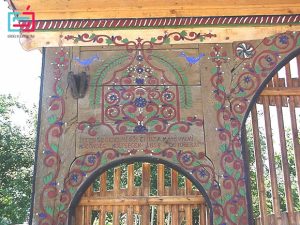 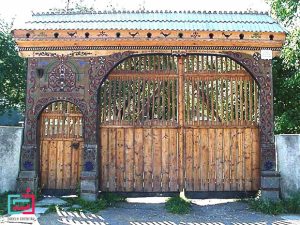 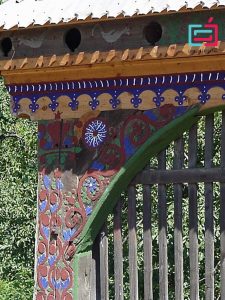 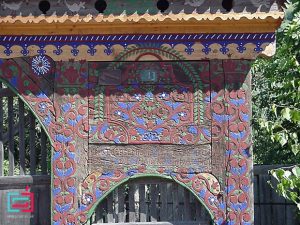 The sekler gate has usually a leaf roof and mostly decorated. Perhaps under the effect of the old noble mansions, they have come to the forefront of the Szekler peasant houses. It has two entrances, one pedestrian and one for carriages, the poles of the gate are linked with a frontal beam, called dovetail. The structure of the roof, with or without a blackthorn, is covered with laced shingles. The door openers are paved with plank, or on the bottom paved with plank, and at the top with lath. It is usually made of oak, with popular carpentering technics. They are made with wood hems and wrought iron hems, assembled in horizontal position, after than there is setting up in a vertical position sculptured and painted with decorative patterns. The men from the village builds a gate in a voluntary co-operative work, it’s inauguration being a festive event in the village’s life.
Nyírő József describes the role of the Szekler gates in the life of the Szekler community: The Szekler gate is an authoritative ornament and the crown of the Szekler houses, which the host actually considers as a family member. It cuts off the forest tree, but creates a new place to replace the lost lifes, because the Szekler gate really lives and participates in the circulation of its daily struggle; it becomes alive by the fact that the Szekler puts his soul when sculpting it, and graves the name of God with gentle and pious letters…”
In Szekler Land almost in all villages we can find sculpted and unique Szekler gates. Of these, Satu Mare represents a remarkable artistic value, where the inhabitants of the village keep in their soul the fate of the Szekler gates, trying to take care of the survival of the craft of gate sculpting. From Odorhei area, most of the Szekler gates are in Satu Mare, whose museum value is incontestable. There are more than 200 Szekler gates in the village, which are private property, 25 of them are declared as monumental gates, due to their age and uniqueness. The oldest carved and ornamented gate is from 1858, which adorns the entrance of the Catholic priestly residence.
The characteristic features of the Szekler Gates in Satu Mare are the painted motifs, which are placed next to the ornaments carved on the gates. The craftsmen who builds the gates have preserved and used many ancient elements of folk ornamental art.
The bottom of the gates in Satu Mare is green, symbolizing the Earth, and the leaf roof is blue, representing the sky. In the sky zone is usually the Moon, the Sun and the stars, with different flower patterns, woven and combined with floral motifs.
In addition of the painted motifs we should mention the gates’s inscriptions. Besides the realization date of the gate, often appear remarks, good advices, welcome texts, thanksgiving texts adressed to God.
From 1999 the Traditional Cultural Association Kőlik from Satu Mare organizes annually the Day of the Szekler Gates event, which offers an opportunity for conferences and scientific, ethnographic meetings and meetings for those who dedicates themselves to folkloric tradition, folk culture and folk crafts. Following the debates from Szekler gates day, attended by ethnographers, museologists and gate sculptors from Harghita County, a so-called “Gate Forum” has been created, to undertake the mapping and computerized processing of the old gates of rural villages in Odorhei area.

The program, focusing on the renovation and restoration of all Szekler gates, started in 2009, which works with the Traditional Cultural Association Kőlik, the Local Council from Satu Mare and Harghita County Council, which does not only focuses on gates from Odorhei area, but also puts attention to valuable creations from other counties as well.
In 2012 Ms. Kovács Piroska, the founder of the Kőlik Traditional Cultural Association, was nominated for the Nostra reward, in the category “Remarkable Contribution”, for her work according to the rescue of the Szekler gates: – This prize is not for one person, it is the success of the community from Satu Mare and Szeklerland – Mrs. Piroska said.